An Inside Look At Our SupercrossLIVE VIP Experience 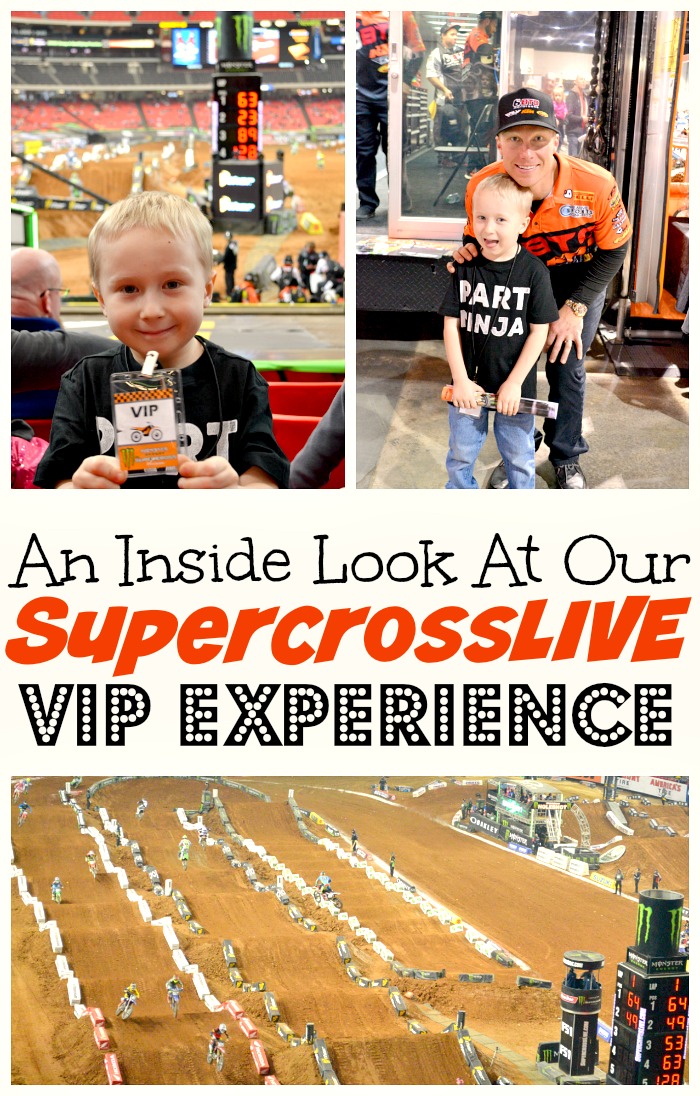 A special thanks to Feld Entertainment for providing our family with a SupercrossLIVE VIP experience.

Our family recently had the opportunity to visit the Georgia Dome and experience the very exciting event, SupercrossLIVE! For those of you that may be unfamiliar with this event, Monster Energy AMA Supercross, an FIM World Championship, is an off-road motorcycle racing competition, produced inside the world’s premier stadiums, where dirt is brought in and sculpted using construction equipment. Some of the world’s greatest athletes compete in what has been described as the most physically demanding sport in existence. Monster Energy Supercross races can contain more than 150 riders competing for a spot in the finals. Qualifying heats eliminate players until the count is down to 40 riders. The 450SX Class Main Event features 22 riders, as does the 250SX Class finale. 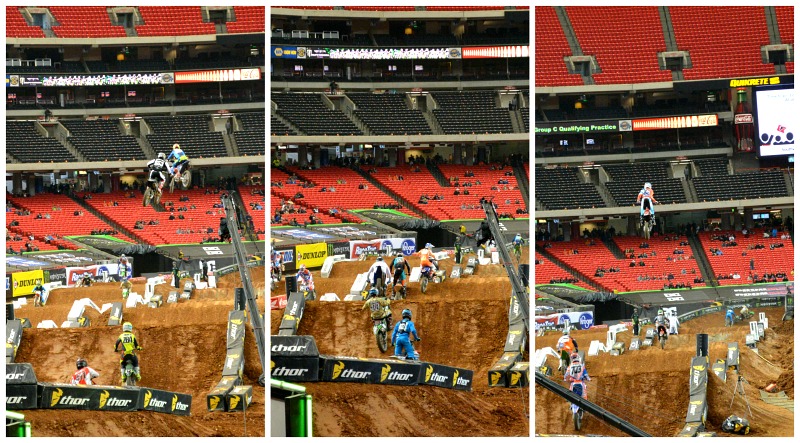 We spent some time front and center watching the racers compete, what an experience! 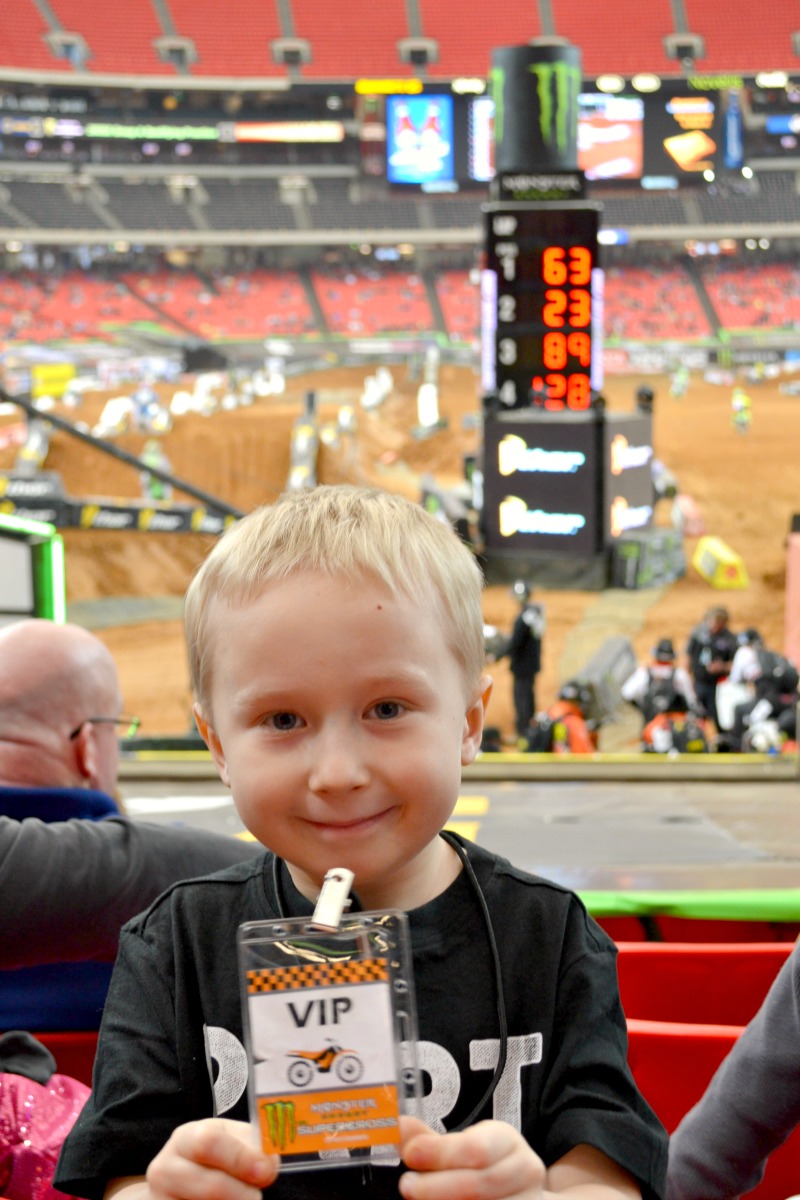 Watching the track being set up was surprisingly intriguing to watch. The track crew brings in roughly 500 truckloads of dirt for each contest (which equals roughly 1.5 million pounds) and takes a crew of seven with construction equipment about three days to build the course. The soil is stored year-round and used for various motorsports events. 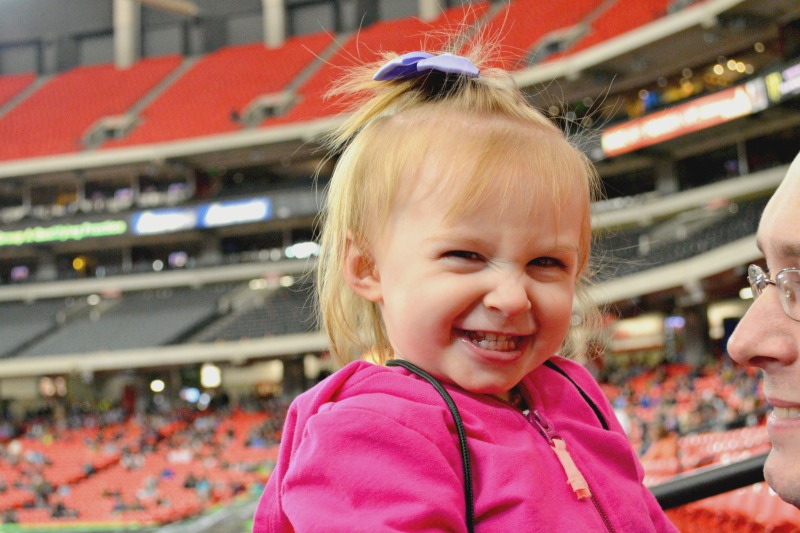 We were able to watch the first few wave of riders fight for the final 40, then we headed out for something even more exciting. We then had the opportunity to take a look around the tour bus of ride Andrew Short and see how this team travels. The best part is that we were able to spend the day with his wife and hear so many wonderful stories about their family and many adventures. 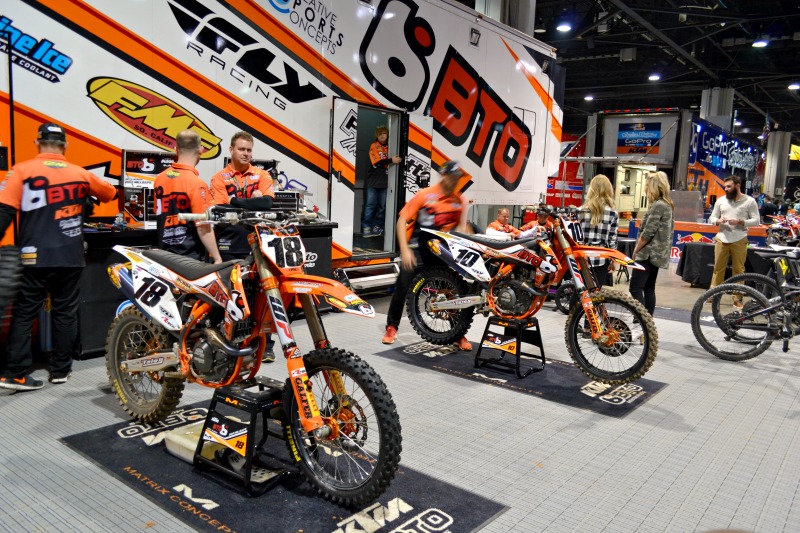 My son was especially excited to meet Andrew Short and get his autograph, his post is currently hanging proudly on his bedroom wall. 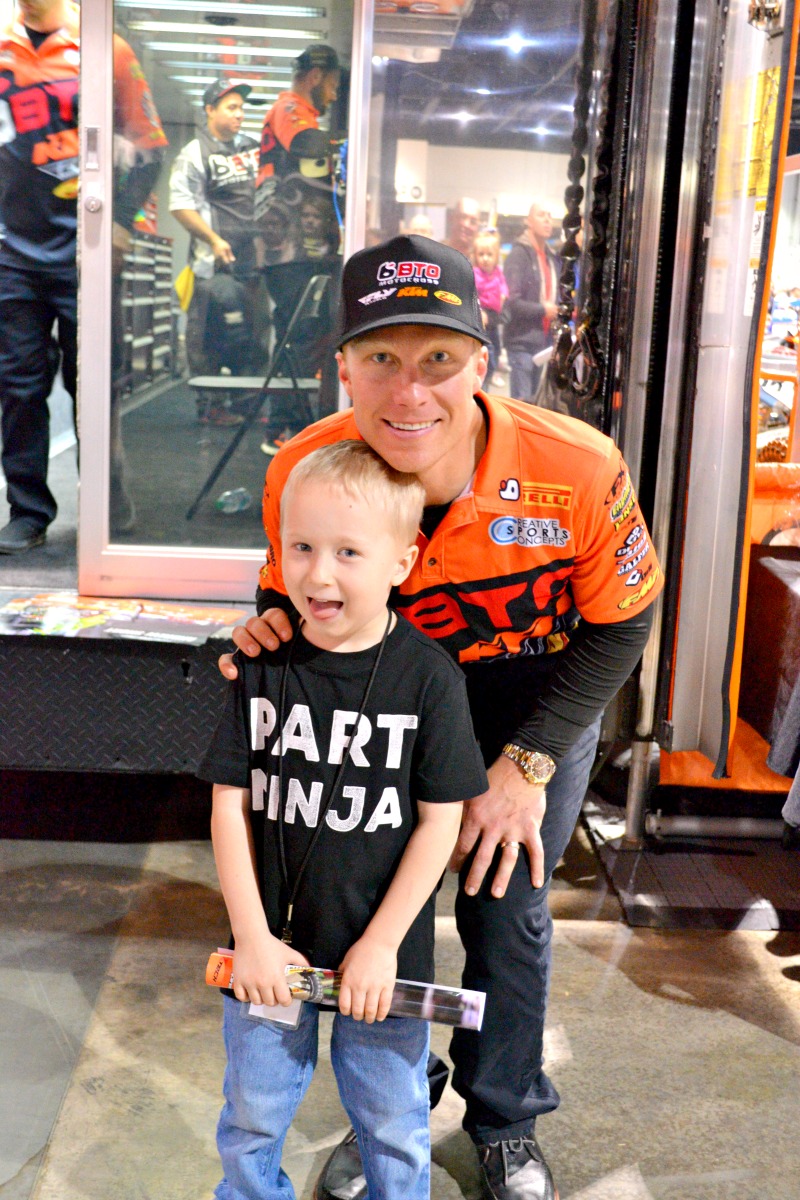 After that bit of fun and excitement, it was time to return for the races! The night began with fireworks as they announced the racers. They did a really great job at getting the audience amped up and excited for the event. 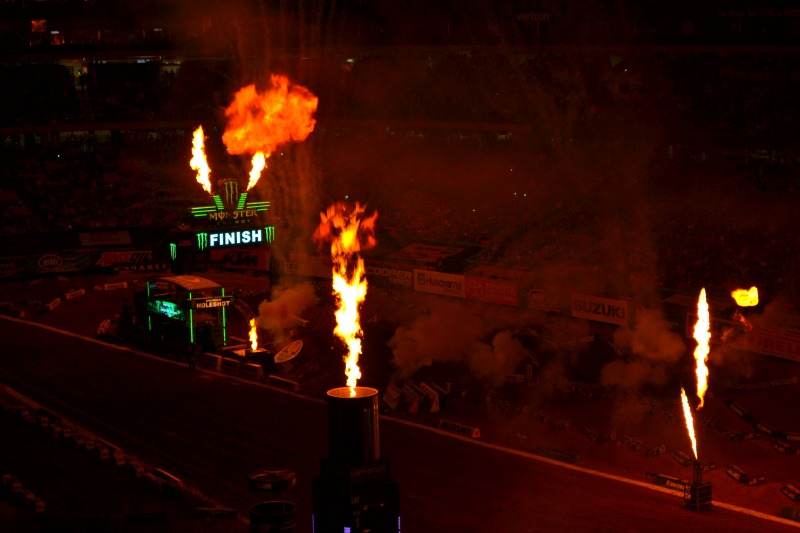 These races we quite intense and the stadium was full of energy an excitement. We had the perfect view of the track and enjoyed every second of the show. The main Event races for the 450SX Class run 20 laps and the 250SX Class goes 15. You can expect to see competitors going in excess of 60 mph at a typical supercross race and soar as far as 70 feet in distance, while flying as high as a three-story building off jumps called “triples.” 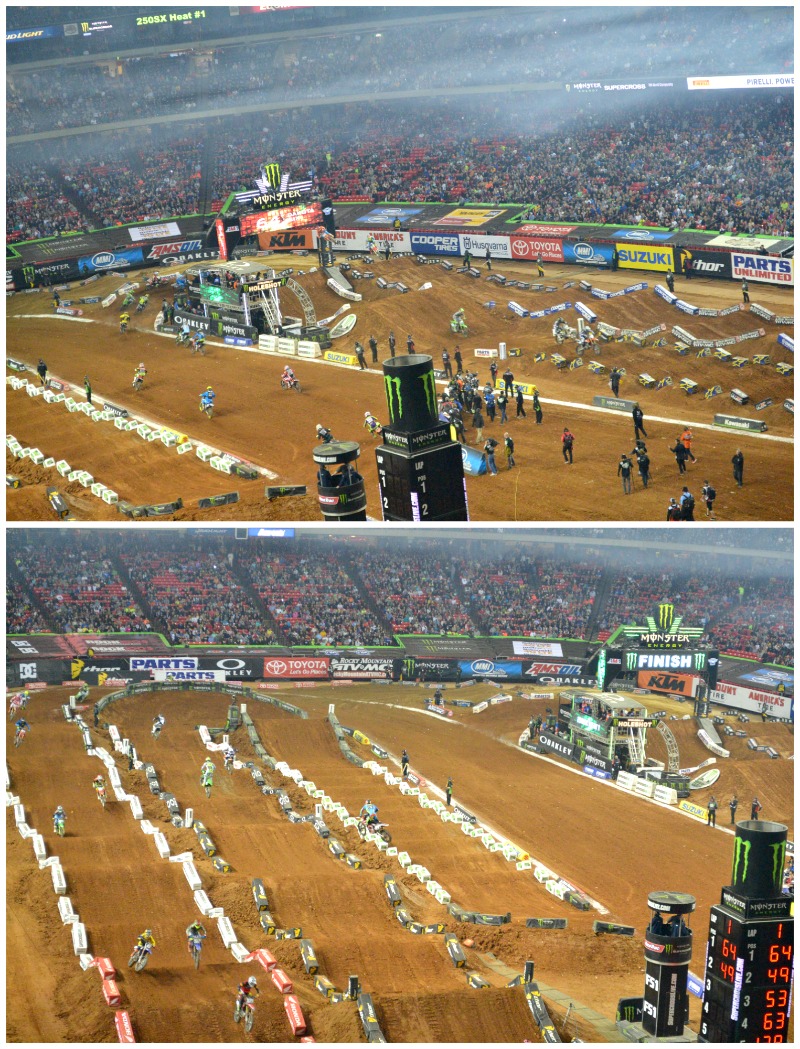 The most important part was that the kids had fun and created some unforgettable memories. They were talking about their SupercrossLIVE event for days and proudly wear their swag to school. If you are considering this event next year, I highly recommend it! In addition to the main races, there are Practice laps and qualifying heats in the afternoon, with other exciting activities, such as autograph sessions and open paddock areas at most venues, going on throughout the day. Supercross is an extremely affordable, fan-friendly and family-oriented event and fans can purchase a ticket to a Monster Energy Supercross race for as low as $10! 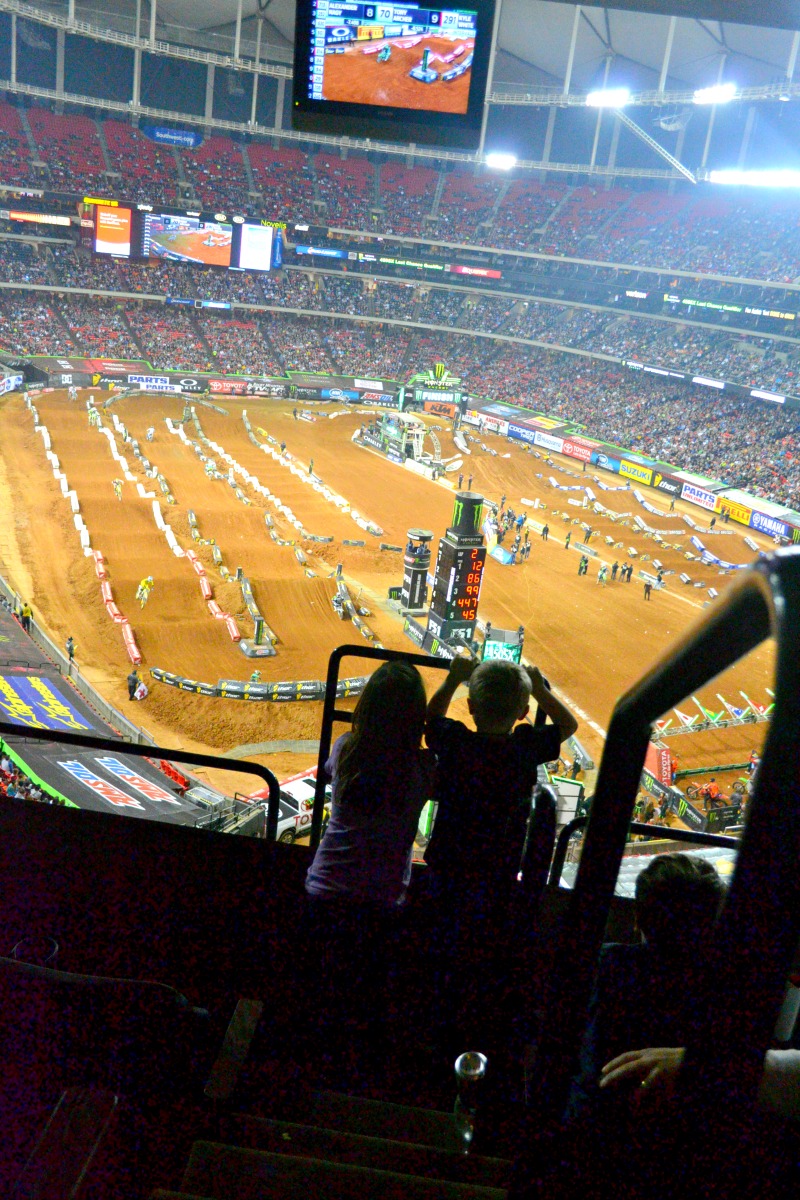