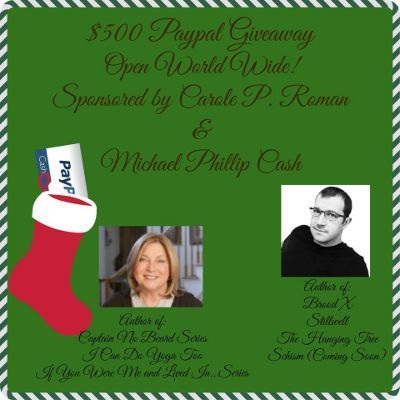 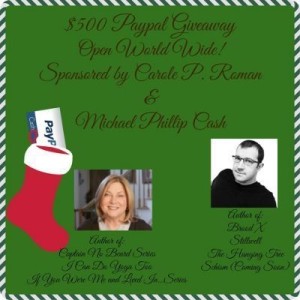 Welcome to the $500 Cash Giveaway!

Named to Kirkus Reviews’ Best of 2012 for her first book, award winning author Carole P. Roman started writing as a dare from one of her sons. Using an imaginary game she played with her grandson as a base, Captain No Beard was born.

“Captain No Beard – An Imaginary Tale of a Pirate’s Life” has not only been named to Kirkus Best of 2012, it received the Star of Remarkable Merit, and won the Pinnacle Award for 2012. “Pepper Parrot’s Problem with Patience” Book 2 in the series, received 5 Stars from The ForeWord Review The Clarion Review. It has followed with six more books to the series. Motivated by her love of yoga, Roman has written a book that not only teaches four poses, but shows how easy and accessible yoga can be.

Her new non fiction series, “If You Were Me and Lived in…” combines her teaching past with her love of exploration and interest in the world around us. The debut book in the series, “If You Were Me and Lived in…Mexico” has won the Pinnacle Award for Best in Children’s Non Fiction 2012. France, South Korea, Norway, Kenya and Turkey. They will be followed with India and Australia.

She plans to do Portugal, Greece, and Argentina next year. Writing for children has opened up a whole second act for her. While she is still working in her family business, this has enabled her to share her sense of humor as well as love for history and culture with the audience she adores. Roman lives on Long Island with her husband and near her children.

Michael Phillip Cash’s first book “Brood X – A Firsthand Account of the Great Cicada Invasion” is presently under consideration for a film adaptation. His well received second novel, “Stillwell – A Haunting on Long Island”, has stayed on the top of Amazon’s “100 Best Seller” in it’s genre since its release earlier this year.

He recently released “The Hanging Tree”, his first novella. Michael is currently working on a new book, Schism, which will be available soon on Amazon. Michael lives on Long Island with his wife and children.

We wish our readers Happy Holidays and warm wishes.
Good luck to all and to all a good night!

Refer your friends using your unique link at the top of the Rafflecopter for even more chances to win.

One winner will be chosen at random from all valid entries.

One thought on “$500 Cash Giveaway Event”