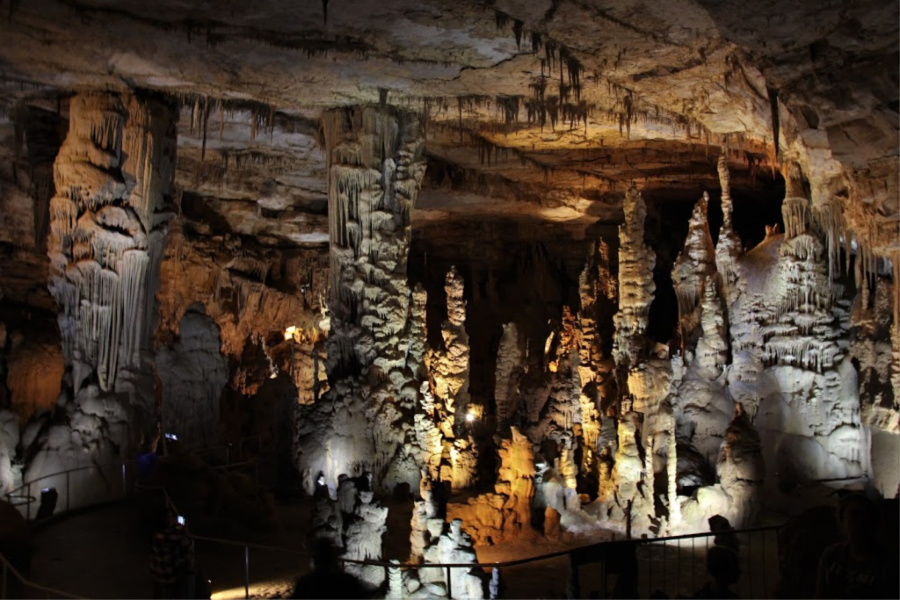 Another great trip in the books this past week when we ventured to Alabama and explored Cathedral Caverns! Originally called the Bat Cave, Cathedral Caverns opened to the public by Jacob Gurley in the 1950’s. The cave was renamed because of its cathedral-like appearance and eventually purchased by the state in 1987. The cave opened as a State Park in the summer of 2000 and has been giving tours ever since.

Activities
Cave tours are scheduled throughout the day. The cave is also wheelchair accessible. Just click on “Cave Tour” under “Things To Do” for a complete listing of tour times and prices. In addition to cave tours, Cathedral Caverns State Park also features gemstone mining, an activity for any age, but especially popular with younger visitors. A bag or bucket of mining dirt (seeded with either rough cut gemstones or fossils) is purchased and then sifted through running water in custom-made flumes. You can identify your finds using the gemstone identification display.

There is a beautiful cabin located at front of the cave entrance where you can visit the gift shop, purchase a snack/drink, or use the restrooms. We enjoyed wondering around this area, there are several different plaques where you can read up on the history of the cave.

Cathedral Caverns’ Gemstone Mine is a great area for the kids! Purchase a bag of prepackaged gemstone, then head over to the mine area and work the dirt in the water running through the custom made flumes. Children can identify what they find by using the gemstone identification display.

There was a small trail for people to enjoy while waiting for their tour of the cave to begin. Very easy trail to tackle and family friendly.

A view of the back of the cabin, standing on the bridge and the end of the small trail we hiked.

The first feature the people notice about Cathedral Caverns is its massive entrance. The huge opening measures 126 feet wide and 25 feet high!

Here is the entrance while standing inside of the cave and looking out. The temperature started to drop significantly in this area (outside temps were around 90 degrees). The cave actually maintains a comfortable 60 degrees temperature year round, so this is a trip you could take any time of the year!

One last look towards the entrance as we make our way further into the cave! A tour guide is required for viewing the cave and each day has scheduled times where they bring groups in. This cave has a lot of great history and many interesting facts, the tour guide will tell you all of it along the way.

Cathedral Caverns features many amazing sites, here is a map to give you an idea of the layout of the tour:

The tour was over an hour long but goes at a slow pace, this path is also wheelchair and stroller friendly. They do a great job keeping the walking areas well lit and have put lighting all throughout the cave.

Cathedral Caverns contains many memorable features. You will have the opportunity to view a “caveman” perched atop a flowstone wall, a “frozen” waterfall, a large stalagmite forest, and a stalagmite that is 27 feet tall and 3 inches wide!

Here are the drone shots we took, gives you a better visual of of how large the cave entrance is.

Here is the video footage captured with the drone:
Inside the cavern are some of the most beautiful formations Mother Nature has ever created including “Goliath”- one of the largest stalagmites in the world measuring 45 feet tall and 243 feet in circumference. We captured this amazing sight on the GoPro, take a look down below!