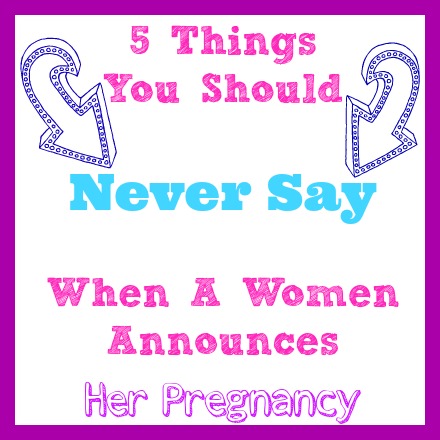 Just a few months ago we discovered that our family will be welcoming the newest member of the family in July 2014! The kids are over the moon with excitement and greatly looking forward to their new baby brother or sister. If only everyone shared their sense of excitement, joy and eagerness to welcome a beautiful bundle of joy into this world. I will never forget the excitement that came with announcing to our family that we were expecting our first. I swear everyone was even more thrilled when we announced our second pregnancy and could not contain their excitement over the fact that we would now have siblings on our hands. I’m not sure what it is about telling people you are expecting your third that completely freaks them out, but you defiantly don’t get the same level of excitement as the first two announcements. You would have thought I had just announced I was pregnant with my 15th child! There’s not a whole lot you can say that will shock or surprise me, I have a whole lot of crazy running though the family bloodline. With that being said, here is a short list of actual things said to me shortly after I announced we were expecting baby number 3… all of which I highly recommend you never say to any women after she announces her pregnancy, they may not have as much tolerance as I myself do.

I already have one boy and one girl so I could really care less what this baby is. I am the oldest of four girls… I can understand if I were on my fourth pregnancy, had three girls already and now badly just wanted a boy! But that’s not the case for us so please don’t put ideas in my children’s heads. Instead, encourage them to want a healthy brother or sister, not get their hopes up on one sex over the other. I am the one that is going to have to deal with that sadness and disappointment when they find out their having the opposite of what you persuaded them into wanting. I have had several family members make it very clear what they want this baby to be and now my children have had it put in their heads what they want the baby to be… and lets just say one of them is going to be very unhappy when they find out their not getting the baby in the sex they wanted… thanks guys…

2. Kid’s Are So Expensive These Days

Where I was during the first seven and a half years of motherhood is a mystery to me! Clearly I have been living in lala land where money trees are abundantly growing in my back yard. The thought never once occurred to me, after bringing two children into this world, that they consumed my money… never once crossed my mind. Thank goodness you were there to remind me, I will be much better prepared the third time around.

3. Was Your Pregnancy Planned?

Call me old fashioned, but there a few simple rules I like to follow when it comes to other people’s business. I never ask people how much they payed for stuff, maybe that’s just me but I think it’s insanely rude. It’s right up there with never asking people if they planned their pregnancy! I mean really… who cares!? At this point in time we are to terms with it, announcing it with joy and happiness in our hearts and ready to welcome a baby into our world… how does whether it was planned play into that? Anyone that asks you this is just plain nosy!

4. You Are Going To Have Your Hands Full

AGAIN PEOPLE… thank you for pointing out yet another fact that I had never taken into consideration until now. I feel a bit repetitive in my statements, which I can’t quite help since people feel the need to inform me of such obvious things… I already have my hands full and some people are fine with that. I am up for that challenge and not going to let fear of hard work keep me from my dream of having a third child, so please stop popping my happy bubble Mr. rainclouds!

5. My Neighbor Just Had a Miscarriage

Under no circumstance should you even utter the word miscarriage, let alone mention you know someone that has had it happen to them. It actually had a family member inform me (because I clearly gained no knowledge during my first two pregnancies) that I have to remember not to do anything strenuous because their neighbor shoveled the driveway and had a miscarriage. Really? You couldn’t have waited 10 minutes to leave your ignorant statement to yourself before turning my sunshine into hail? I don’t know about you, but I worry that if my pants are too tight it will hurt the baby… trust me lady, I’m doing just fine to my body in order to prevent such a tragic event… thanks for that one.

So there it is fans, five actual statements made to me during the first week I announced I was expecting my third!

So tell me, what are some of the worst things people have said to you when you made your big announcement?

How to Give your Child More Support at School